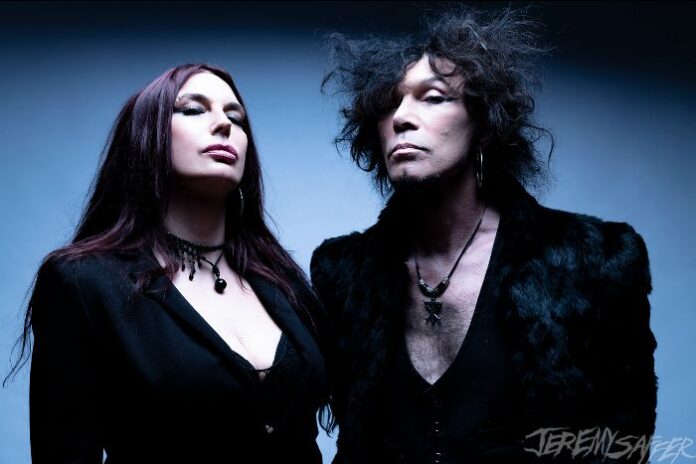 The band is also about to embark on a North American tour! The trek will kick off on May 5 in Akron, OH and will conclude in Brooklyn, NY on May 29! Tickets are on sale now.

Evil Becomes Rule is available NOW! The album is available on digital and CD formats as well as vinyl LP variants in transparent blue, red marble and black colors.

About  Evil Becomes Rule, Valor Kand says the following:
“Both Evil Becomes Rule and The Root Of All Evilution are pretty much the story of evil. These songs are generally about “The Evil Within Society,” not necessarily stemming from a demon, or a devil, or a God. Instead, it’s about something concerning the evil within mankind.

Evil Becomes Rule is a continuation of this theme. We’re going from the present time into the future.  When we started writing this album, we anticipated an event like the pandemic; a disastrous event occurring  on the earth. So now we’re asking the question, “maybe this is just the beginning of it?” 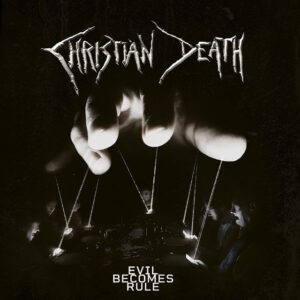 “The founding fathers of American goth rock, Christian Death took a relentlessly confrontational stand against organized religion and conventional morality, with an appetite for provocation that made Marilyn Manson look like Stryper. Regardless of who was leading or performing in the group, Christian Death set themselves up to shock, both in their cover art and their lyrics, which wallowed in blasphemy, morbidity, drug use, and sexual perversity. Their self-consciously controversial tactics set them apart from the British goth scene, having more to do with L.A. punk and heavy metal, and thus the band dubbed its sound ‘death rock’ instead; however, their sensibility was ultimately similar enough that the ‘goth’ designation stuck in the end. Their music also relied on slow, doomy, effects-laden guitar riffs and ambient horror-soundtrack synths, and their theatrical performances were strongly influenced by British glam rockers like David Bowie and Roxy Music, as well as industrial provocateurs Throbbing Gristle. The latter was especially true of the band’s first incarnation, led by vocalist and founder Rozz Williams, – When Williams left in 1985, guitarist Valor Kand took over leadership and sent the group in a more intellectual, political, and metal-oriented direction. A subsequent dispute over ownership of the Christian Death name lead many of their fans to take sides. Christian Death had an enormous influence on the American goth scene, shaping the sensibility of countless goth, metal, and even industrial acts that followed. Sadly, the Kand-Williams dispute ended in tragedy in 1998, when a heroin-addicted Williams took his own life.” ~ Steve Hue VH1, ROLLING STONE

There has been a ridiculously huge revolving door of membership in the Los Angeles band known as Christian Death. In the beginning, not long after the local California release of the first album, ‘Only Theatre of Pain,’ the band irrevocably and formally broke up. This left Rozz Williams at home with his overtly religious parents in Pomona, CA to contemplate his insufferable boredom, his only relief being found on the pages of his lyrics. After being invited to the record release party for Pompeii 99, a band already enjoying success in L.A.,  Rozz met band leader, singer and guitarist Valor Kand. Before long they were inseparable friends and Rozz was invited to join Pompeii 99. Together as Pompeii 99, while rehearsing for a planned European tour, the head of a French record label that Valor had been negotiating with, proposed the notion of renaming his band Christian Death. Neither Valor nor Rozz wanted to entertain this, however, the incentives proposed by the label eventually prevailed and thus Pompeii 99 was reborn as Christian Death. The second Christian Death album, ‘Catastrophe Ballet,’ which resulted from this deal, was recorded in Wales (UK) (a place where several future Christian Death albums were also to be born). A month before the release of Catastrophe Ballet, the French label head released a compilation which he called ‘Deathwish,’ comprised of previously recorded, unreleased outtakes and single tracks he had licensed.

Recording the second album was followed by the very first Christian Death tour which began in Paris and on to most European countries. The emotional stress of this first tour was hard on Rozz causing him to return to Los Angeles months before the other members, who remained in Europe. Upon Valor’s return to Los Angeles, work began immediately on the third album, ‘Ashes.’ Meanwhile, the release of a live album called ‘The Decomposition of Violets’ recorded in Hollywood was also released.

After the release of ‘Ashes,’ plans were underway for the second European tour when Rozz, just weeks before the first scheduled date in Italy, announced his plans to quit the band. With no intention of cancelling the tour, Valor returned to lead vocals, the bass player became the guitarist, and the guitar tech became the bass player; the tour proceeded as planned, but without Rozz.

Now fronted by Valor, the band relocated from California and settled in London, which they used as a base to tour Europe relentlessly in the midst of controversy, riots, bomb threats and protests by extremist Christian groups. Many concerts were canceled as a result of direct pressure by influential religious organizations.

From England, the band release nine more studio albums and four live albums in the territories of England, Germany, Italy, France, Japan and USA, with each release in each territory having different artwork, configurations and bonus tracks. Among these releases was the critically acclaimed album ‘Sex and Drugs and Jesus Christ,’ which depicted a controversial image of Jesus shooting heroin. The single ‘Church Of No Return,” which went to No.12 in the UK charts and ultimately landed the band numerous spots on MTV, VH1, Super Channel, BBC and countless other Euro television and radio shows. Meanwhile in the USA, Christian organizations began burning their albums in public and on Christian Television networks.

In 1994, Valor relocated Christian Death back to the USA, with the lineup centering around himself and Maitri on bass and vocals. “He returned with 1994’s ‘Sexy Death God,’ which many longtime fans greeted as his best and tightest effort in quite some time.”~ Steve Hue VH1

Once again based in the USA, for the first time, it was possible to do full North American tours, of which there were many, which also included Mexico where the live album “Amen” was recoded at the first ever show in Mexico City for Century Media. Later to be followed by the studio album: ‘Pornographic Messiah,’ which was also recorded in Mexico, then mixed in Holland.

“In 2000, they added drummer Will “Was” Sarginson (ex-Cradle of Filth and Blood Divine) and toured Europe alongside Britain’s Cradle of Filth, one of the more popular black metal bands of their time. The two groups got along well enough for several Cradle members to guest on Christian Death’s 2001 album ‘Born Again Anti Christian,’ helping it become one of the most metallic records in their catalog.

“The following year, vocalist and bassist Maitri, by then the second most continuous member of Christian Death, issued her black metal-influenced solo album, ‘Lover of Sin’ (confusingly labeled on the cover as ‘Christian Death Presents…’). In 2003, Cradle of Filth guitarist Gian Pyres officially joined Christian Death for their European tour.” ~ Steve Hue, VH1

In response to the post 9/11 period, the album ‘American Inquisition,’ was recorded and released with Season of Mist. The tours for this album included new territories for the band: Brazil, Chile, Peru, Ecuador. Australia, and New Zealand. Around this time, Christian Death released multitrack versions of several songs for the “Rock Band” video game series as well at that time bootleg figurines of both Rozz and Valor began to appear.

The following year, the band kicked off a full tour of The Americas that extended into 2014, with a full back catalogue digital global release. The year culminated with the band’s performance at Hellfest Open Air Festival, in which they supported Kiss, Rob Zombie, and Limp Bizkit.

With the 2015 release of ‘The Root of All Evilution,’ the band hit the roas again that autumn in Europe, which continued into North America in 2016. The band again returned to Europe and drew the final curtain in Israel.

The song “Between youth” was re-released in 2017 and featured in the Vice TV series on HBO, ‘Balls Deep.’ Later, in Autumn 2017, Christian Death completed the longest North America Tour to date. The tour package included Lords of Acid, Combichrist, En Esch, and Night Club.

From 2018 onward, the band continued to dominate the world and perform throughout Europe and the United States, which included and appearance at the Cloak and Dagger festival in Los Angeles, CA as well as pulling off a mini-tour in 2021 despite a global pandemic. That same year, the band formed their union with Season of Mist and started to roll out the vinyl and CD reissues of all 16 studio albums, which included all new special editions and certain bonus features.

Now, the band is gearing up to release a brand new offering via Season of Mist, ‘Evil Becomes Rule.’ With the release of their 17th studio album, CHRISTIAN DEATH shows no signs of faltering or slowing down. The godfathers of death rock have simultaneously perfected and redefined their signature sound, which has served as a core inspiration for many bands of both the past and present, such as DANZIG, CELTIC FROST, and TYPE O NEGATIVE, to name just a few. ‘Evil Becomes Rule’ isn’t merely a musical endeavor, but an artistic expression that blends elements of gothic rock, post-punk, and dark pop, cultivating a poetic aesthetic that is certain to continue to influence the next wave of gothic rock.