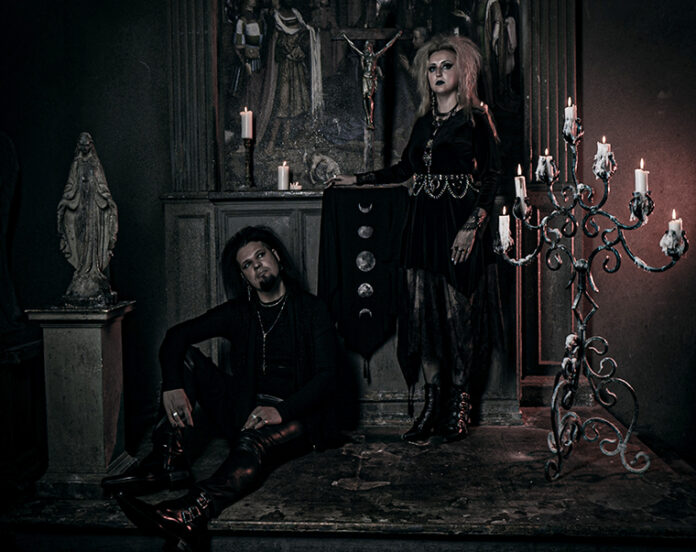 Chants To Dissolve is about the spiritual essence that represents a certain alchemical phase of Solve (a transitional process between the Nigredo and Albedo phases in basic Alchemy).

On the abstract, the EP represents the invisible and inaudible flattering of a butterfly’s wing to the deafening roar of the inescapable wave of the coming future. Physically, it’s an effort aimed at changing the composition, without an exact result In a philosophical context. This means that the future is not defined and there is only the possibility of one or another existence; a certain point of polyfurcation, a set of evolution.

With pulsing vibrations of guitar and synths transformed into elegant canvases in cold tones, Raven Said is the flexible fusion of darkwave / goth rock / post-punk; the musical expression of symbolic mysticism and psychology.

Chants To Dissolve is available NOW on CD and digital formats via Bandcamp.

The founders of the band – Andrey and Maria united for creation of old school Goth Rock / Occult Wave project. One of the most famous poems of the American romantic writer E. А. Poe inspired the band’s stylish title.

Raven Said accumulates the energy of Second Wave Goth Rock and complements this with elements of Post-Punk and New Wave to form their original modern sound.

Musically, Raven Said takes inspiration from the likes of Rosetta Stone, Nosferatu, Witching Hour, The Cult, Mephisto Waltz, Cinema Strange among others. Raven Said‘s lyrics focus on occultism, attraction to the world beyond and following into the realm of the unconsciousness themes.

Raven Said has received considerable acclaim and recognition. The band has participated in numerous online, print and radio interviews and has been reviewed in various online and print publications worldwide. They have also taken part in online festivals – Absolution NYC, Goth for Sanctuaries, ARG-Fest & Luna Negra.

2017 saw the release of the EP, Seven Deadly Tapes which was well-received both in Russia and abroad. In 2020, the band released the LP, Beyond the Darkest Hour on the UK label, Secret Sin Records.

Broadening the forms of traditional Goth rock, Raven Said are experimenting with new shapes and themes having the artistic charm and authentic visual aesthetics.