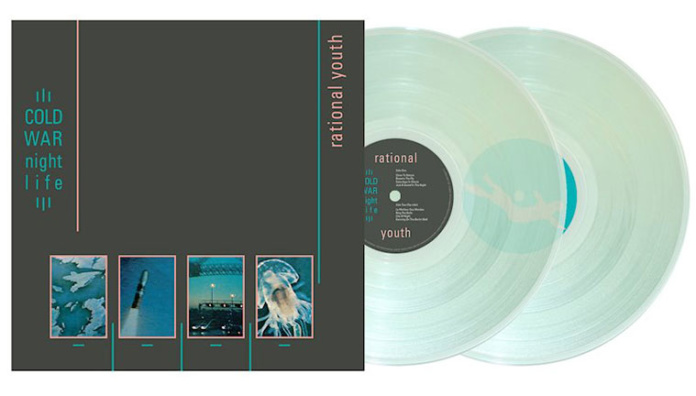 FOR FANS OF: Kraftwerk, Gary Numan, Naked Eyes, Human League… â€œFrom beginning to end, this album is brilliant, with wonderful songs played with emotion on synthesizers. Danceable, melodic, futuristic (for its time), and overall, a treatâ€ â€“ All Music

This extended version is now available as a double LP on translucent vinyl and is also streamable on Spotify and other digital platforms. Now it is being made available on CD. This expanded reissue features extensive liner notes, testimonials, and rare photos from the bandâ€™s personal archives. It also includes both the original 1982 album tracks and all of the related original extended remixes and singles.

When ‘Cold War Night Life’ was originally released in 1982, it was one of the first all-synth pop albums released in Canada. It became one of the biggest-selling Canadian independent albums at the time. The album was also distributed overseas, even making the Top Ten on Polish State Radio, despite the fact that Poland was still behind the Iron Curtain. It charted on college radio across Canada and made inroads into commercial radio, particularly in Quebec, where the French version of ‘City of Night’ (‘CitÃ© Phosphore’) went Top Ten.

The cult following for ‘Cold War Night Life’ has remained steady over the years, with many contemporary synth bands citing it as a seminal influence, including hugely popular artists like Italyâ€™s Frozen Autumn, Swedenâ€™s Covenant, Germanyâ€™s Psyche and Australiaâ€™s Parallox.

â€œThe most remarkable thing about making this album, from an historical perspective, was the fact that we were making an all-synthesizer pop album, and in Montreal in 1981-82 that was pretty new,” says Tracy Howe.

“A lot of our arrangements and all the synth sounds were worked out at home and sequenced, so when we got to the studio we would set all the synths up and patch everything, tell the engineer to put machine in record and roll the tape, weâ€™d start the MC-4 MicroComposer and half a song would instantly go to tape. The rock and roll engineers we had were kind of stunned by this, and by the fact that we were using a drum machine (a Roland TR-808, one of the first on Canadian shores).”

Rational Youth was formed in 1981 in Montreal, Quebec by Tracy Howe and Bill Vorn, both of whom idolized Kraftwerk. Considered one of Canada’s first synthpop groups, their second gig saw them opening for Orchestral Manoeuvres in the Dark. After releasing their first single ‘I Want To See The Light’ in 1981 for YUL Records, an independent label established by Marc de Mouy and Pat Deserio, Howe and Vorn were joined by Kevin Komoda.

This was followed by the 1985 release of the ‘Heredity’ LP, produced by Howe and Dee Long, with three charting singles. Howe released it as the sole remaining member.

After retiring the project in 1986, continued interest led to a 1997 CD reissue of ‘Cold War Night Life’ and a reunion concert for Howe and Vorn in Sweden. In 1999, Rational Youth, with Howe joined by keyboardists Jean-Claude Cutz and Dave Rout, released ‘To the Goddess Electricity’, the first LP in 14 years, on Sweden’s October label. The trio toured Scandinavia until playing their final concert at the 2001 Tinitus Festival in Stockholm.

Tracy Howe and Bill Vorn united again in 2009 at the initiative of Marc Demouy, recording a new version of their 1982 track ‘Dancing On The Berlin Wall’ in honour of the twentieth anniversary of the wall’s dismantling. In 2010, it was issued as an EP by YUL Records on CD, followed by 2011’s ‘City Of Night /Cite Phosphore’ EP on CD, consisting of re-recordings of this early single plus remixed versions of the original recording.

In 2016, Rational Youth (now consisting of Tracy and Gaenor Howe), released the ‘Future Past Tense’ EP through Artoffact Records. That year, they appeared on the ‘Heresy’ compilation, released by the Cold War Night Life label. A play on the title ‘Heredity’, this album also featured covers of Rational Youth tracks by 18 artists from various countries, including former bandmates Dave Rout and Kevin Komoda.

The new edition of ‘Cold War Night Life’ is available on CD and digitally via Bandcamp. Vinyl can be ordered separately via Music Vaultz.

Rational Youth have two upcoming shows with China Crisis – on Jan. 25 at Toronto’s Revival Bar and Jan. 26 at Mississauga’s Classic Bowl. The latter is already sold out, but tickets for the first show can be obtained at http://bit.ly/2NOZKCP. Fans can look forward to further European dates in early 2020.