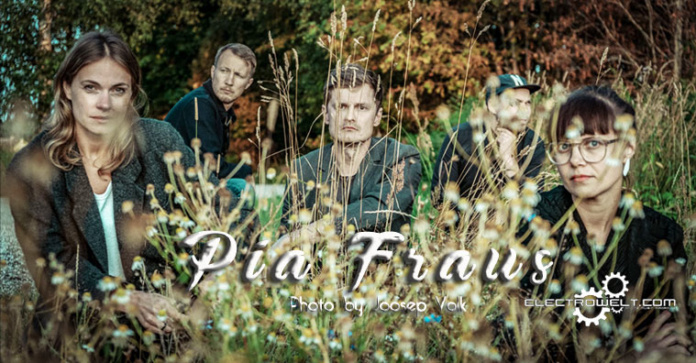 A flagship of East European the dreampop-shoegaze scene,Pia Fraus has released their new album ‘Empty Parks’. Ahead of that, they present the singles ‘Love Sports’, ‘Hidden Parks’ and ‘SweetSunday Snow’, complete with remixes.

“This is the poppiest album we’ve ever made. It’s melancholy and happy at the same time – definitely happier than our latest ‘Field Ceremony’ album. To work with John McEntire was my teenage wet dream.  I have been a massive fan of John’s work over the years, and I never thought that one day I have a chance to sit next to this guy and make my own record. Of course, it was quite challenging and stressful for me,” says frontman Rein Fuks.

“Although the process of making this album wasn’t been the easiest, I associate this album relates mostly with the feeling of happiness and positivism. The awareness of being able to be hopeful and make jokes about life even if everything seems to going downhill,” says vocalist Eve Komp.

The band’s most recent album ‘Field Ceremony’ was released n 2018 by Shelflife Records (USA), Vinyl Junkie Recordings (Japan), and their own imprint Seksound (EU). Some highlights of the 21 years since the band formed include working with Teenage Fanclub’s Norman Blake, who produced their 2008 album ‘After Summer’, and the 7″ vinyl split single ‘Mute The Birds / Ships Will Sail’ with Ulrich Schnauss.

Drummer Joosep Volk adds, “Personally, Empty Parks means a lot. It’s sort of a homecoming to me. 16 years has past since I last played with the rest of the group and when Rein asked me to return, I never thought twice. Understanding that sometimes things do fall apart and you just have to pick yourself up and deal with it. Life is deviously clever, we just have to endure.”

In January, Pia Fraus will also be playing a series of live concerts in Europe and Japan, where they will be playing several dates with peers Ringo Deathstarr and Bertoia. In the meantime, enjoy theDocumentary on Pia Fraus ‘To Silmi Island‘.