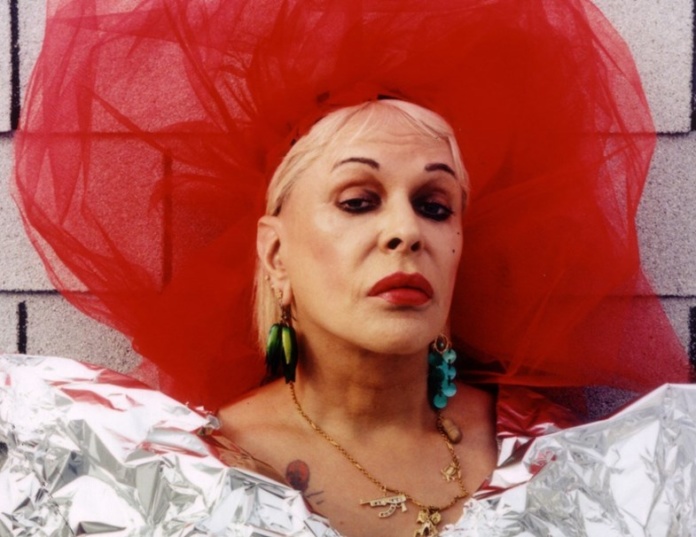 Genesis P-Orridge, legendary frontman and founder of Throbbing Gristle and Psychic TV, passed away on Saturday 14th of March, as it has been confirmed.

The very talented musician, poet, and performer had been fighting leukaemia for the last tree years.

Psychic TV earned the Guinness Book Of World Records for the most albums released in one year when they released a monthly series of live albums in 1986.

For what it counts, Genesis P-Orridge identified as third gender. 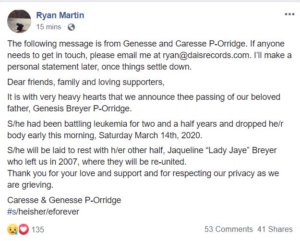 Born in Manchester, P-Orridge developed an early interest in art, occultism, and the avant-garde while at Solihull School. After dropping out of studies at the University of Hull, s/he moved into a counter-cultural commune in London and adopted Genesis P-Orridge as a nom-de-guerre.

On returning to Hull, P-Orridge founded COUM Transmissions with Cosey Fanni Tutti, and in 1973 s/he relocated to London. COUM’s confrontational performance work, dealing with such subjects as sex work, pornography, serial killers, and occultism, represented a concerted attempt to challenge societal norms and attracted the attention of the national press.

COUM’s 1976 Prostitution show at London’s Institute of Contemporary Arts was particularly vilified by tabloids, gaining them the moniker of the “wreckers of civilization.”

P-Orridge’s band, Throbbing Gristle, grew out of COUM, and were active from 1975 to 1981 as pioneers in the industrial music genre.

In 1981, P-Orridge co-founded Psychic TV, an experimental band that from 1988 onward came under the increasing influence of acid house.

Although involved in reunions of both Throbbing Gristle and Psychic TV in the 2000s, P-Orridge retired from music to focus on other artistic mediums in 2009. P-Orridge was credited on over 200 releases.

A controversial figure with an anti-establishment stance, P-Orridge was heavily criticised by the British press and politicians.

P-Orridge was cited as an icon within the avant-garde art scene, accrued a cult following, and been given the moniker of the “Godperson of Industrial Music.”

Robert Smith: ‘Τhis year has been a disaster’